Welcome to the Academy Arsen Asatryan 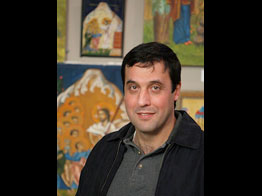 Hello, I am Arsen Asatryan. Since the age of 22 i have been using a
wheelchair due to the earthquake of 1988 in Spitak, Armenia.
Afterwards i started painting and became an artist. Now I make art
with oil-paints on canvas, I do carving on wood, and paintings on
wood.

I was born in 1966 in Armenia, Spitak.I left school in 1982.Then I graduated from Spitak College.Since my school days I have been fond of drawing.In 1987 I went to the army for two years.After that I entered Yerevan Industrial Teachers`Training Collage.Because of the earthquake I decided to continue drawing.The desire came to me again after the days I had suffered.I made some works ,took part in few exhibitions,then I decided to work more hard. And now,I think,I am happier with my pictures.I am married Arusyak and I have a dau0ghter, Nare Mariam and a son, Garegin. I love them very much.

Arsen Asatryan is an artist living and working in Spitak, Armenia. Though he painted at a young age, he didn’t commit himself seriously to the art until after the 1988 earthquake in Armenia, which left him paralyzed. In those years, painting became both a source of solace and a way to contribute toward Arsen’s medical expenses. “I was in a wheelchair and I needed something to occupy myself, and a job that didn’t involve using my legs,” he says. “I decided to pursue my childhood dream.” Arsen’s work ranges from traditional still life to Armenian iconography and biblical scenes. He says he has been inspired by Armenian artists Martiros Saryan, Panos Terlemezian, Minas Avetisian, and Ivan Aivazovsky. Last year, Arsen, 44, showed his work in an exhibition with his mentor, Mick Oxley, a UK-born artist who traveled to Armenia in 2006 to lead art workshops. Arsen was one of Oxley’s students, and the two struck a friendship that led to the 2009 exhibition in York Minster, a cathedral in York, England. Titled “An Armenian Journey,” the six-week exhibition also showcased the work of Iranian-born artist Karen Babayan. The exhibition followed an earlier display of Arsen’s work in Yerevan. In addition to showcasing his paintings, the exhibitions give Arsen an opportunity to raise funds for medical expenses surrounding his spine injury. Arsen says his family has provided tremendous support throughout his newfound career. He met his wife when he was in the hospital after the earthquake. They married shortly thereafter and have a son and a daughter. “She made me see life again and love again,” says Arsen. “It has been 22 years since I have been able to walk,” he says. But Arsen is optimistic about recent developments in spine treatments. “For the first time, I believe that I can actually start walking again,” he says. “That there is a chance that I can dance with my wife and daughter, and play soccer with my son.”

For more information about the artist and his work, please contact him at asa.arsen@gmail.com 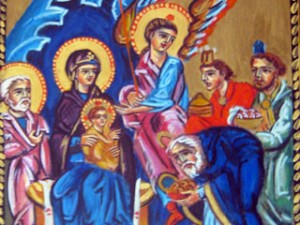