Welcome to the Academy, MARTIN VOGEL! A real Action Painter.

When Martin Vogel was born, God with his infinite wisdom blessed him with three gifts: the heart of a champion, a will of iron and an artists’ vision that speaks to the human soul. Each of these gifts serves Martin well as he transverses whole life spans in his mere 4+ decades of life.

It is impossible to resist the beauty and grandeur of a Martin Vogel panoramic visionscape. His imagination brings us past the line of reality and into the brink of delight. Whether you abandon earthly rules and ride the line of a gargantuan 5’ x 25’ Vogel creation or submerge yourself under the sea, your soul experiences definition of line, movement, compelling color and whimsy. Everyone who sees Vogel’s visionscapes is left with the same exasperating question – How does he do that?

Vogel’s art speaks for itself, and those of us who are mere mortals stand in awe when we learn his secret. Martin Vogel uses every tool available to him to speak to humanity’s spirit through his art, including his wheelchair.

It is said if you want to make God laugh, tell him your plans. No one knows this better than Martin Vogel. The precocious Martin turned his mother’s hair prematurely gray when he began riding motorcycles at the age of 5. His racing started at age 8 with motor cross, road racing by 17 and professionally riding the American Motorcycle Association Formula 2 circuit at 19. The spoils of victory reinforced the thrill of the race. Vogel was racing grand prix events at tracks such as Laguna Seca and Daytona, Florida. He finished his second year near the top of the point standings in California and was on his way to moving into the European ranks. He had also secured a sponsorship with Honda. At the peak of his racing career, Martin’s first life abruptly ended on a hairpin turn on the Infinion Raceway in Sonoma, California. A T3 spinal cord injury left him paralyzed from the chest down. Vogel called on his first gift to pull him through, the heart of a champion. His initial concern was how he was going to occupy his time and how to “channel all the emotions inside me. That’s what racing had done. But without that in my life, I knew that I had to find something else to challenge me, something else to make me life my life.” A true champion is not measured by how many wins he has achieved, but by how many times he gets up when he is knocked down. Unable to ever ride motorcycles or even walk, Martin wheeled out of rehabilitation after only seven weeks, and into his second life as a wheelchair racer.

His new incarnation demanded that he use his second gift, a will of iron. In a culture that viewed the disabled as handicapped, Martin was determined to change the way people view the “dis”abled. He calls himself handicapable. Ever the champion, two months out of rehab, Martin entered the Los Angeles Marathon and finished the race. For eight years, Martin pioneered a new vision for disabled racers that led to a string of victories. With a generous sponsorship from McDonald’s, he toured North America and Europe. Vogel won the Long Beach Marathon and two world championships back to back in 1991 and 1992. Vogel held the world record in the 5000 meter race in 1992. He is a seven time world champion in the 5000 meter. He brought a serious edge to the sport and a level of professionalism it hadn’t had before. “I made my living off it for eight years. Once I became a world champion, I knew it was time to find something else to accomplish.”

Martin then experienced a void often faced by champions – something was missing from his life. Armed with his first two gifts and a desire to paint, Martin’s second life ended and his third began. This time he desired to share his gifts with the world through his art. An avid illustrator and sculptor as a youth, and from a family of successful fashion designers, Vogel always had an eye and aptitude for art. One day, while looking down at some tracks his wheelchair wheels had left in the dirt, Vogel began toying with the idea of applying paint to his wheels. That soon grew into an obsession and he began customizing his wheels in order to create interesting shapes, and began painting in earnest. His wheelchair became his brush. This unique approach allows Martin to become one with the chair and canvas. He creates abstract paintings, but also finds that “for whatever reason, a lot of natural motifs show up – like birds, fish and stars.” The result is a brilliant representation of motion.

When one speaks to Martin Vogel it is clear that he is an artist with an unusual method. He is not a disabled artist or a paralyzed artist, he is a brilliant artist. How fortunate the world is to be in the presence of a champion who recognizes and uses all the gifts he has been given. If only we were all so appreciative of the miracle of life and open to its challenges. Martin Vogel’s true gift to humanity is present in his paintings – his gratitude for the precious gift of life itself. 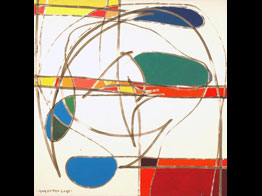