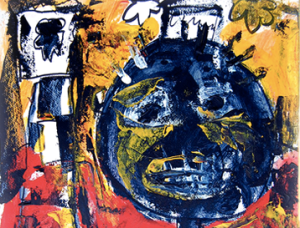 During these formative years, the Learning Tree Preparatory School provided an opportunity of inclusion, learning and exceptional caring which was an important part of Haile’s development. There, he developed a love for music, dance, and the arts. This foundation remained with him and was a motivating force in his development as an artist.

After graduating from The Learning Tree Prep School, he attended Mt. Pleasant Christian Academy, and MOTC in Manhattan where he graduated High School. He continued his studies in art with The Art Students League of New York, Artist Carl Thelemaque of Haiti, Artist Ronaldo Davidson of Jamaica, Harlem School of the Arts (HSA), and Donald Babatunde Eaton.

Haile King-Rubie has exhibited throughout New York City and marketed his art via HAILESIMO Inc. His business enterprise, while at its early stages, represents Haile’s efforts to be self-sufficient and self-sustaining. Haile takes pride in the Village that has raised him. The caring staff of the Learning Preparatory School has left the most valuable foundations of his development.

I am a self employed Artist